I recently watched the 30th anniversary re-release of Steven Spielberg’s “Close Encounters of the Third Kind.” The last time I had seen the movie was when I was in a science fiction film class in college in 2004. I was amazed at how little I remembered of the story. I remembered the flashing lights, the mashed potatoes, the music and the aliens that looked a bit like ET (this movie came out in ’77 before ET’s debut in ’82). But I completely forgot the plot. 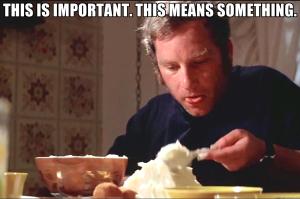 Richard Dreyfuss’ character Roy Neary has a close encounter with aliens, becomes obsessed, and makes the decision to leave his wife and three young kids to pursue a closer encounter. This part of the plot is quite developed too. How could I remember the mashed potatoes but forget the tears coming down his son’s face at the dinner table in the same scene?

Why did Roy make that decision? Did he feel that the impact he would have working with this alien species outweigh his role as a father and husband?

After leaving the movie theater, my boyfriend and I imagined a sequel 30 years later where the older son declares war over that alien species. It’s a revenge plot seeded by the trauma from his father leaving him as a child.

Or did Roy find something truly important that meant something beyond himself, his family, mankind, and alienkind?